A Taste of Japan

In May 2015 we spent 18 days in Japan with Michele, a Swiss friend from Daniele's childhood. Daniele's dream - never mine. But no regrets. From the moments we fell out of a Qantas flight in the early hours of a Saturday morning, we encountered a hospitality unsurpassed on any of our journeys to other parts of the globe. Lost in subway stations, unable to work ticket machines, stumbling into daylight, scrutinising maps, searching for readable signs - we were predictably flummoxed. Invariably, help was at hand, and someone would approach and steer us in the right direction. While in shops and buses, hotels and guesthouses, we were treated with warmth and care. Invariably. And it never felt superficial.

Not to mention the overriding sense of security. Rarely did we see a police-person. And when my ever-mindful beloved left her phone on the steps of a Zen temple, she had it back within 12 hours!

Sure, its a very different culture - and living there would be a challenge (especially the food scene). But you can only go by your experience, and ours was uniformly positive.

Thank you, Japan and those who helped make our stay so fulfilling.
﻿ECUADOR & THE GALAPAGOS﻿
The photos below cover four weeks in October 2014. We flew from Sydney to Santiago in Chile, then on to Quito, capital of Ecuador and 2800 metres above sea level. Our hotel in the old town - the "Centro Historica" - became the hub. Two hours north-west to the cloud forest at Mindo and a wonderful respite at El Monte, the eco-attuned creation of Tom and Mariela. Then the road south to Riobamba, where Mario took us up into the Andean heart of ancient villages and farmlands - and the next day guided us to the Inca ruins at Ingapircha and to the vibrant city of Cuenca. There we spent our final day trekking at 4000 metres in the stunning Parque Nacional El Cajas. Back in Quito for another  night at the quirky Hotel Cantuna....before a flight to Coca on the Napo River, followed by 4 hours aboard motor and paddle canoes to a wilderness lodge deep in the Amazonian jungle. Finally, again to Quito to pick up a flight to the Galapagos Islands, 1000 kilometres east in the Pacific.....and a week-long cruise with 14 others on the catamaran "Anahi". Exhausting, exhilarating.....and utterly memorable. 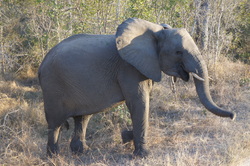 In July 2013 we had 5 days at Skukuza Camp in the Kruger Park, 6 hours drive from Jo'burg. From Jo'burg we then flew to Lusaka in Zambia and on to the South Luangwa National Park for a 10-day walking safari. Then we headed to Livingstone and Victoria Falls - Mosi-oa-Tunya (Smoke that Thunders). For our final stage we flew back to Lusaka and took a small plane over the escarpment and down to the  Lower Zambezi National Park where we had 5 days at Chiawa and Old Mondoro camps. The images below contain a snapshot of an unforgettable introduction to Africa 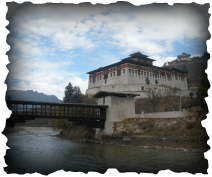 In 2010 we were fortunate to be part of a group of therapists on a 12-day journey through the captivating kingdom of Bhutan. It was a rich experience, with daily meditative practice and reflection complementing the cultural immersion. The slideshow below gives a snapshot.